Perhaps the most lyrical of the orchestral woodwinds, the flute has been given something of a raw deal by successive generations of rock-centric commentators who have taken a few of prog’s more excessive dalliances with the instrument and used them to render it a pariah, lazily overlooking the flute’s vital contribution to such landmark releases as Love’s Forever Changes, The Beach Boys’ Pet Sounds, Van Morrison’s Astral Weeks and Pharaoh Sanders’ Karma – not to mention its consistently sublime presence in the early work of Kraftwerk.

The boundless versatility of the flute is the sine qua non of this debut album by littlebow, the duo of Keiron Phelan (State River Widening, Smile Down Upon Us) and Katie English (Isnaj Dui, The Owl Service). Its ten, exquisitely realised tracks run through a whole gamut of soundscapes: introspective night ambiences and sweeping melancholy (‘The Crooked Post Men Of Pershore’); overdriven, Reichian rhythmic assaults (‘Oarsmen’s Lament’ – inspired by the classic Jason And The Argonauts clashing rocks scene); lavish, Morricone-esque textures (‘It’s Too Steep A Climb (For A Really Cheap Horse)’); baroque, Basil Kirchin-like vignettes (‘Girl With Orange Umbrella’) and neo-prog riff-pop (“For Thijs” – a good-humoured nod to Focus frontman Thijs Van Leer) – all of it brimming with unexpected melodic and harmonic twists.

Previously only known to each other as fellow, file-sharing, members of the itinerant Orla Wren collective, the littlebow duo combined for a lightning-flash brief series of recording sessions, improvising the lion’s share of their compositions and deliberately placing orchestral instruments within a resolutely post-punk production ethos, crucially spurning the overly polite, rule-observant trends currently found in much ‘neo-classical’ music.
Blending the tonal and textural possibilities of concert and bass flutes, with support from Jenny Brand’s clarinet, the drums, drum machines and percussion of Jérôme Tcherneyan (Piano Magic) and vivid daubs of, keyboard, guitar and glockenspiel from the ensemble, this is very far from being some overly tasteful showcase for the lulling qualities of the ‘edge-blown aerophone’ (the scientific designation for flute). Indeed, it’s as redolent of late-’60s English folk pastoralism and mid-’90s post-rock as it is timeless instrumental works such as Popul Vuh’s Hosianna Mantra and Kraftwerk’s Ralf Und Florian.

Ultimately, The Edge Blown Aerophone leaves influences and comparisons in the dust and offers a voice that is unique, one that repositions the most ethereal of orchestral instruments as a thing of dynamic resonance and consistently surprising malleability.

1. It's Too Steep A Climb (For A Really Cheap Horse)
2. The Crooked Post Men Of Pershore
3. Oarsmen's Lament
4. Girl With Orange Umbrella
5. "As Soon As Dawn With Her Rose Tinted Hands Had Lit The East"
6. Snapping Twigs
7. To Run Through The Christian Wolff
8. Thijs Drift
9. For Thijs
10. The Dripping Pan

Limited edition of 400 copies • SOLD OUT 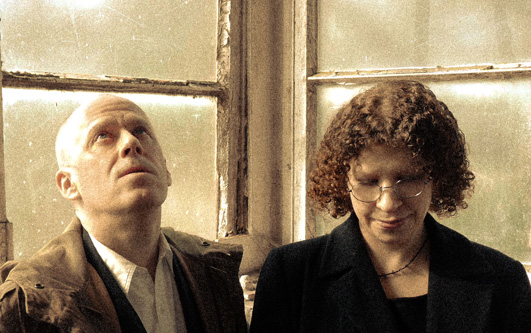 BACK TO RELEASES PAGE